So this weeks theme for the P52 project (1 photo each week for a year) is “Made with Love.”  I had originally thought I would do a craft item or a meal I prepared for my hubby, but after my two blogging friends Christa and Laine posted adorable pictures of their newborns those seemed sort of shallow. 🙂

So the next best thing I could share is our little guy, Casper, who was Made OURS with love.

There is a sweet little story behind how he came to be ours.  I grew up with lots of pets – dogs, cats, chickens, fish, rabbits, garter snakes, and even a peahen at one point.  When my husband and I married and bought our first house I had really wanted to get an indoor cat.  But hubby wasn’t at all enthusiastic about it, so I dropped the subject.  A year or so later, my hubby was at work and had a customer come in that day with a crate of kittens that he was trying to find homes for.  My husband was asked if he would like one.  He said he didn’t, but his wife would love one.  When he poked his finger through the door, Casper came right up and rubbed against his hand with the sweetest little meow and my husband was sold! 🙂

My husband had to work the rest of the day so they put him in an old tattered box and a lady in the office watched over him until 5 pm.

When my husband walked in the door that night, he gave me that old tattered box and said he had a surprise for me.  I opened it up to find the most adorable snow-white kitten with blue eyes and a pink nose and ears, and I fell instantly in love.

He is now 4 1/2 years old and my husband loves him just as much as I do.  (You can’t see in the pictures but Casper is actually cuddled next to him on the couch and they are both fast asleep.)  He is a wonderful companion, is always at our side, is spoiled rotten, and we adore him.

So there’s the story of the best gift my husband has ever given me and how Casper was “Made OURS with love.”

This picture wasn’t taken this week, but it’s one of my favorites that shows off his blue eyes so I  thought I would share. 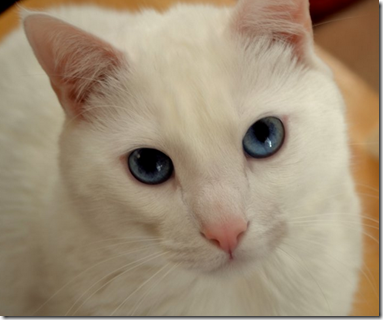 Do you have a special friend in your life?

PROJECT 52 WEEK 2: MADE WITH LOVE at My3BoyBarians

This site uses Akismet to reduce spam. Learn how your comment data is processed.

I love doing simple, frugal things to make our house feel like HOME! Come learn along with me how to have a beautiful home on a budget.